Alek Akuen Signs On For 2022 Season A big roster spot has been confirmed, with the signing of 6’3 Centre, Alek Akuen for 2022.

Alek joined the group midway through last season after spending 4 years playing College Basketball in the US. Akuen most recently played for the Southern Illinois-Edwardsville Cougars in 2019-20.

With a 6’3 frame, Alek has a huge wingspan which allows her to block, contest and alter shots on the defensive end.

With a sound post-game and soft shooting stroke, Akuen brings different options for the team at both ends of the floor. 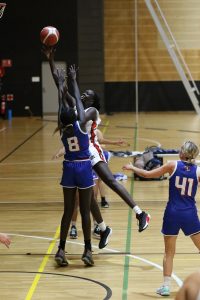 “I want to thank the whole Norwood family for the support they’ve shown me in my short time here, it’s been an honour playing for such a class organisation. I’m excited to come back and have an opportunity to go after it again with the girls.”

With Alek, an NCAA D1 talent, joining the roster again for 2022, the team is developing a great young core to build upon for future seasons.

“We are thrilled to have Alek sign for next season, after joining the team halfway through this year she quickly became an important part of our group we can’t wait to watch her grow and develop 2022.”

With Genna Anderson and Alek Akuen now confirmed, the team will be looking to confirm more players soon.